AUB is a leading arts university for the creative industries, turning creativity into careers. We're passionate about our creative subjects and encourage curiosity, risk-taking and adventure.

AUB is a practical university with strong ambitions for our graduates to enjoy rewarding careers. Our alumni constantly return with incredible stories of things they’ve done, business they’ve created and awards they’ve won.

No creative subject stands alone at AUB. Our collaborations extend beyond courses that work together, to the wider university world and links with the creative industry. AUB staff and students are engaged with the local, national and international communities in which we live, work and create. Our vibrant maker culture is at the heart of everything we do alongside our commitment to professionalism.

Our staff and students work with global brands and local SMEs providing our creative services to exciting projects. We use our innovative thinking to support our communities and Social Enterprises at home and abroad. We are a gateway to the £92 billion creative industries, which is growing at a faster rate than the whole of the UK economy, accounting for 1 in 11 jobs.

We consistently achieve outstanding employability results because of the quality of our teaching and our campus and facilities which prepare our students for employment. According to the most recent DLHE Survey, 98% of our graduates were employed or in further study within six months of graduating.

Our staff are exceptional. They are inspiring teachers, researchers, industry practitioners and technicians who are all here to support students with their studies and help them to achieve outstanding outcomes.

We’ve been awarded Gold in the TEF (Teaching Excellence Framework) by HEFCE which assesses the quality of teaching. We received this for delivering consistently outstanding teaching, learning and outcomes for our students. 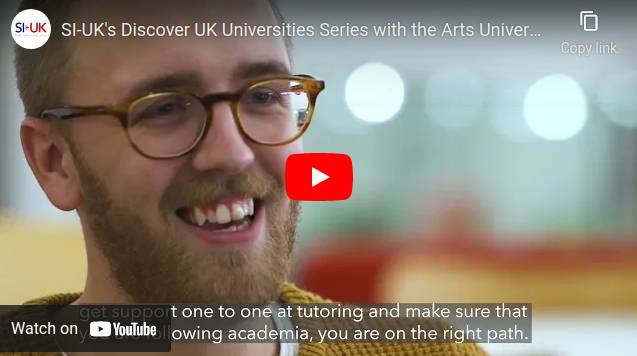 There are currently nearly 400 international students from over 60 countries studying at the university. The International Office has an ‘open door’ policy, where students can pop in for a casual chat or find out answers to any queries or concerns they may have.

Students also benefit from English for Academic Purposes appointments, an International Student Society as part of the Students Union, Country Ambassadors who are always there if you need a friend (and they run events throughout the year that you can go along to or get involved in), and great Careers and Student Services departments.

More than 12 percent of the AUB’s research has now been classed as ‘world-leading’ with a further 42 percent being classed ‘internationally excellent’, according to the Research Excellence Framework (REF) 2021.

Living and studying in Bournemouth is at least 20% cheaper than London plus there’s the added bonus of being right on the coast with 10 miles of sandy beach! We offer a range of Halls of Residence, each offering something unique – from right on campus, to the bustle of the town centre (and walking distance to the beach!), to the quiet of residential streets. From modern self-contained studio flats to more traditional en-suite rooms in cluster flats or shared residential houses, there is something for everyone. Our Halls are:

Alternatively, a number of our student’s look to live in shared rented accommodation in areas including Bournemouth town centre, Winton, Charminster and Ensbury Park. Living in private rented accommodation can often be cheaper, with some students choosing to stay in the same house throughout their time at AUB.

AUB is located in Bournemouth, which has been named the best seaside town in the UK by British Travel Awards. Bournemouth has a vibrant multicultural community and is home to Bournemouth Arts by the Sea Festival and Bournemouth Emerging Arts Fringe. We’re located right between Bournemouth and Poole, so you’ll have the best of both worlds when it comes to entertainment and eating out. We’ve got famous nightlife, a thriving arts scene, and outstanding natural beauty.

Bournemouth is surrounded by award winning beaches, the New Forest, and World Heritage Jurassic Coast, and is a lively student town with lots of things to do. And for those weekend trips, London is only 2 hours away.

AUB’s stunning state-of-the-art campus is a creative hub designed for specialists. With a backdrop of head-turning architecture, you’ll be in a community of like-minded makers and thinkers. We invest heavily in industry-standard technology and spaces that equip you for life in the creative industries. We want you to get used to the equipment and facilities you’ll find in the real world.

We have an unrivalled library that’s totally dedicated to the creative arts and a gallery where we exhibit inspiring works from renowned artists. There’s a canteen, bar and café on campus and plenty more to choose from at the neighbouring Bournemouth University.

Our alumni do amazing things – some go on to work for global companies in the creative industries and some become successful freelancers, while others start up their own businesses.

o   Wolfgang studied Photography at the AUB in early 1990s. He is a critically acclaimed photographer who has been published in magazines such as i-d and Vogue and he is the first photographer to win the Turner Prize.

o   Nick studied Photography at the AUB in the late 1970s/early 1980s. He has photographed some of the world’s most famous people and is a multi award-winning fashion photographer and owner of SHOWstudio.

o   Edgar studied a two year National Diploma in Audio Visual Design at the AUB in the early 1990s and has achieved huge success as a writer, director and producer. He is most famous for his collaborations with Simon Pegg which include the Channel 4 television series ‘Spaced’ and films ‘Shaun of the Dead’, ‘Hot Fuzz’ and ‘The Worlds End’.

o   Suri studied Film at the AUB in the mid 1980s. He has directed several films, including ‘A Man of No Importance’, ‘New Year’s Day’, and ‘Wuthering Heights’ as well as several episodes of the BBC drama ‘Waking the Dead’. He has won four Film Festival awards and has been nominated for three BAFTAs.

o   Peter Cook received an Honorary fellowship in 2008. He originally studied at AUB in the 1950s. He was one of the founder members of the influential Archigram group in the 1960s and was co-editor of Archigram magazine. In 2007, he received a Knighthood for services to architecture in the Queen’s Birthday Honours.

SI-UK's service is fast, reliable and efficient - their consultants are specialists, working closely with all UK universities; through my consultants' advice, and application assistance I was able to get offers from top ranked universities.

We will be in touch within 24 hours to arrange your initial consultation at your nearest SI-UK office. If you are unable to visit us in person, consultations can also be arranged over Skype.